The Power of Appreciation (Part IV)

I am going to reveal one of the fastest ways that you could become a better manager, increase morale, and develop stronger relationships with your people. Would you be interested in hearing about it?
According to David Sturt, writing in the Harvard Business Review,
There’s one simple action that can dramatically increase any manager’s success in gaining the support and engagement of subordinates: recognize great work. That means calling out excellent accomplishments by your employees right away—and doing so in consistent and regular increments from the start.[1]

Three separate studies independently confirm what we know intuitively. Appreciation builds morale and loyalty.
In the first study, the researchers found that strong recognition practices greatly enhanced the relationship with the boss (87% in a company with strong recognition practices compared with 51% where recognition was lacking).
In a second study, of those who have received some sort of appreciation once a month, 82% feel a close bond with their immediate supervisor. On the other hand, for those who receive appreciation less than once a month, that number drops to 62%.
A third study found that employees who had been recognized in the past month also have higher job satisfaction. For those who have received recognition in the last month, 80% were satisfied with their work. That number drops to 51% for those who have not been recognized for the last year or two and it drops down to 42% for those who have not been recognized for longer than two years.
Further, the same study found that by simply recognizing employees that have not been recognized, a manager can raise overall job satisfaction by 31%. Moreover, recognition has a spill-over effect. It also raises the morale of those who are not being recognized because it shows that organizational leaders care about performance.
So, appreciating your people leads to closer relationships, closer bonds, and increased job satisfaction. Even better, it has one of the most pronounced positive effects on organizational morale. Even better than that, it is cheap. It can cost as little as a piece of paper (and a little thought to consider who should be recognized and why).[2]

How I Demonstrate Appreciation

Recognizing each of these factors, I created the Gerdes Leadership Award for my Students at CSU. It goes to the one student in each major semester who has been the best leader in my classes. This is the one student across all of my classes (graduate and undergraduate) that I would most want to follow. The text of the award reads:
The Gerdes Leadership Award (GLA) is presented each semester to the single student across all sections of Dr. Gerdes’s classes who best exemplifies the principles of leadership taught in class.
This is the person that your professor would most want to follow.
This person treats others with dignity and respect (Genesis 1:27), serves others (Mark 10:43-45), sacrifices his or her own interests for the interests of others (Phil 2:4), and sets the example for peers (I Cor. 11:1).
It is just a piece of paper, but it means a lot to the recipient. 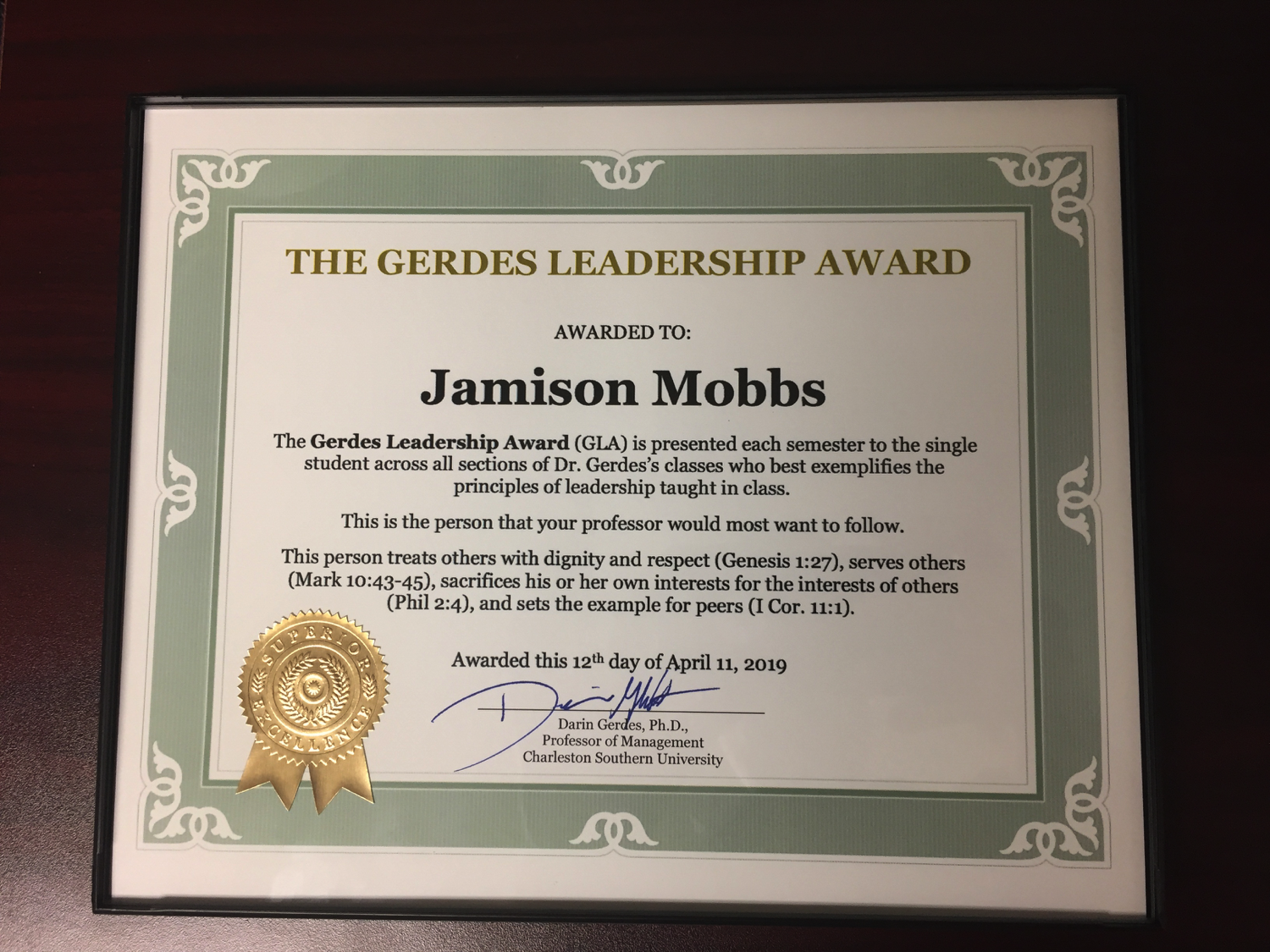 Imagine that you were a student in taking a leadership or management class. What would it mean to you to know that your professor (who designed the Master of Arts in Organizational Leadership program) chose you as “the person that your professor would most want to follow”? Would it bolster your confidence? Would you reflect on, and be more committed to, the principles discussed in class?
This recognition does not cost me much, but it pays significant dividends. It can do the same for you if you are intentional about harnessing the power of appreciation.

What is stopping you from becoming appreciating others?