The Power of Appreciation (Part III)

We have been discussing the power of appreciation. In the first lesson, we reviewed how Joe Girard became the “World’s Greatest Car Salesman” according to the Guinness Book of World Records because he recognized the deep longing that people have to be appreciated.  In the last lesson, we talked about Doug Conant and how he built trust at Nabisco when morale was so low that the consultant who evaluated the attitude survey called the culture “swamp water.” Conant converted swamp water into champagne by being intentional about building trust.
When he left Nabisco, Conant became the CEO at the Campbell Soup company. After he retired, he became a consultant and speaker. His accolades include the following:

That is a lot of recognition. He must have been doing something right.
I think one key to his success lies in his view of problems. When I found out that he wrote TouchPoints, I thought it might be worth reading. He described a meeting where he and his future co-author were discussing problems and his answer was eye-opening:
Mette [his co-author] asked Doug, ‘Don’t you get tired of the ceaseless interruptions?’ After a moment of thought, Doug said, ‘To me, they’re not interruptions. They’re opportunities to touch someone and improve the situation.’ Whereas most people kept trying to minimize the dozens and dozens of encounters they experience every day at work, he believed that those encounters were the work and that how he handled them would ultimately define his success as a contributor and as a leader.
(Emphasis added)[3] 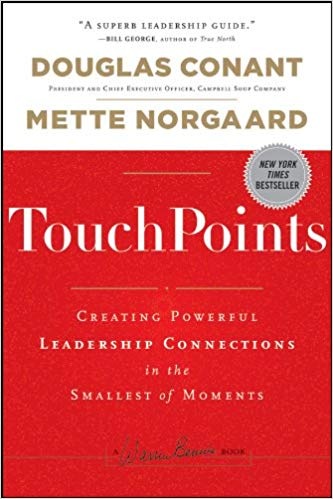 To illustrate, consider how he approached these encounters when he became the CEO of Campbell’s soup. When he took over, Campbells was not doing well. Morale was down as were sales and market share. According to Forbes:
He set about fixing that by doing some very simple and straightforward things that are probably not being taught in any MBA class. For one thing, he put on a pedometer and set out to walk the Camden, New Jersey facility and speak to everyone who worked there. Everyone. Not a casual “how are you?” exchange, but a sit down visit to find out how they really felt about their work, the facilities, etc. … He also wrote over 30,000 personal notes to employees and others he crossed paths with on that ten-year journey, both inside the company and out. That alone is remarkable given that Campbell’s only had around 20,000 employees at the time. People were touched and the workforce became more and more engaged in Campbell’s mission and their particular part of accomplishing it. When Conant retired a decade or so later, Campbell’s was a healthy and thriving organization.[4]
And that is Doug Conant’s secret sauce. He used many little TouchPoints to convert large problems into opportunities to teach, to reach, and to appreciate others. Do you?

Do you see interruptions as distractions to be avoided or opportunities to be welcomed?

[1] Conant’s website says that he is the only former fortune 500 CEO who is a best-selling author, but this claim appears incorrect as numerous other books are easy to find. See Baer and Lebowitz’s 2015 article in Inc. magazine: 19 of the Best Books Written by Super-Successful CEOs.
[2] Doug Conant (2019). ConantLeadership. Retrieved from https://conantleadership.com/about/doug-conant/
[3] Conant, D., & Norgaard, M. (2011). TouchPoints: Creating Powerful Leadership Connections in the Smallest of Moments. San Francisco: Jossey-Bass.
[4] Griffin, J. (2018, August 7). The value of a well-written thank you note.Forbes. Retrieved from https://www.forbes.com/sites/jillgriffin/2018/08/07/the-value-of-a-well-written-thank-you-note/#67638a386500