The Power of Appreciation (Part I)

Joe Girard is in the Guinness Book of World Records as the “World’s Greatest Car Salesman.” According to one account:
Joe Girard sold over 13,000 cars in his 15-year selling career – all at retail – no fleet sales. His selling bests were 18 cars in one day, 174 in one month, 1,425 in a single year. Joe averaged six sales a day when the average salesman sold five per month.[1]
How did he do it? He tapped into a basic human need.
Now, I must preface this by stating clearly that I am not advocating that anyone take advantage of, trick, or otherwise prey on their customers. To the contrary, I am arguing that you should look at the underlying reason that Girard was so successful and honestly meet the basic human need for appreciation.

The term “car salesman,” is pejorative, like the term “politician.” It is hardly complimentary and with good reason. Some of Girard’s tactics employed deception in order to turn a cold call into a lead.
In the book To Sell is Human, Dan Pink dismisses Girard as a huckster. In fact, he is the negative example Pink employed for everything that is wrong with the business. Pink concluded: “Joe Girard is a reason we had to live by caveat emptor [let the buyer beware].”[2] 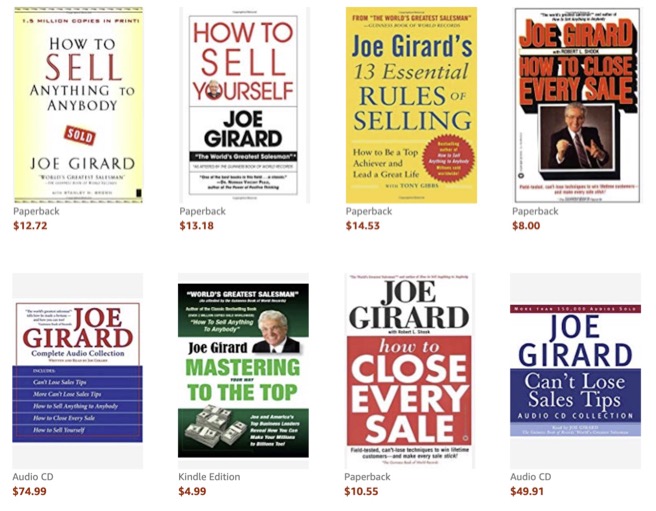 Far be it from me to advocate shady dealings, but there was more substance to Girard than Dan Pink was willing to admit. We’re going to look under the hood.

Girard maintained that he didn’t sell cars; he sold himself. In fact, he said, “I’ve never sold a single car – all I ever sold was a Girard!”[3] That is quite a difference.
Some salesmen focus on the features. Other salesmen focus on benefits. The best salesmen sell the value.[4] But Girard was getting to something deeper. Girard sold likability and a social connection.
Robert Cialdini, a professor at Arizona State and author of Influence: Science and practice, explained:
For all his success, the formula he employed was surprisingly simple. It consisted of offering people just two things: a fair price and someone they liked to buy from. ‘And that’s it,’ [Girard] claimed in an interview. ‘Finding the salesman you like plus the price. Put them both together, and you get a deal.’[5]

It doesn’t take a lot of talent to trick someone into buying something if you don’t have to be there to face the consequences. But Girard was not a snake-oil salesman who would suddenly appear and dupe the unsuspecting, only to reappear in another small town to repeat his scam. On the contrary, his success depended instead on building relationships.
Joe Girard didn’t sell as much as he built–and maintained–relationships. He worked hard and long hours. Much of his time was spent sending personalized notes to customers – and their family members – recognizing birthdays, graduations, marriages etc. Joe cared about his customers – by doing so, the sales would ‘take care of themselves’.[6]
One of the keys to his success was the continual stream of contacts that he made with his customers. According to Cialdini,
Each month he sent every one of his more than 13,000 former customers a holiday greeting card containing a printed message. The holiday greeting changed from month to month (Happy New Year, Happy Valentine’s Day, Happy Thanksgiving, and so on), but the message printed on the face of the card never varied. It read, “I like you.” As Joe explained it, “There’s nothing else on the card, nothin’ but my name. I’m just telling ‘em that I like ‘em.”[7]

What is the difference between appreciation and flattery? In his classic, How to Win Friends and Influence People, Dale Carnegie explained:
The difference between appreciation and flattery? That is simple. One is sincere and the other insincere. One comes from the heart out; the other from the teeth out. One is unselfish; the other selfish. One is universally admired; the other universally condemned.”[8]
Sincere or insincere, people crave appreciation. Cialdini explained Girard’s success with academic studies that demonstrated that people still like praise even when they know that the praise is untrue.[9]
Do you now see why Girard was successful? Girard did two things. He recognized his customers’ need for appreciation and he systematized his approach, sending more than 150,000 “I like you” cards to his customers every year.
Now, I am not suggesting that you falsely flatter your way to success, but I am suggesting that if Joe Girard can generate amazing success by sending cheesy “I like you” cards to his customers, it certainly wouldn’t hurt you to sincerely appreciate your customers. “William James said: ‘The deepest principle in human nature is the craving to be appreciated’”[10]
If false flattery was so powerful, just imagine what might happen with sincere appreciation.

Do you really like your customers? Do they know it? How do you show it?